If you love to play games, you’ll know how important audio quality is.

This becomes even more important if you intend to share your gameplay with followers, such as via a Twitch or YouTube channel.

Do you need a sound card for gaming?

A sound card should be on your must-have list of tools for gaming because of how it enhances gameplay audio and makes games more immersive.

At A Glance: Our Top 5 Picks For External Sound Cards

With that in mind, read our reviews of the best external sound card for gaming.

What’s great about these is that you’ll be able to make use of them for other purposes, too.

WHY YOU SHOULD TRUST US

The goal is to provide a free resource for anyone looking to build a quality home studio. The reviews below are a result of hours of research and analysis. We provided the pros and cons and ranked each product to help you make a quick decision. 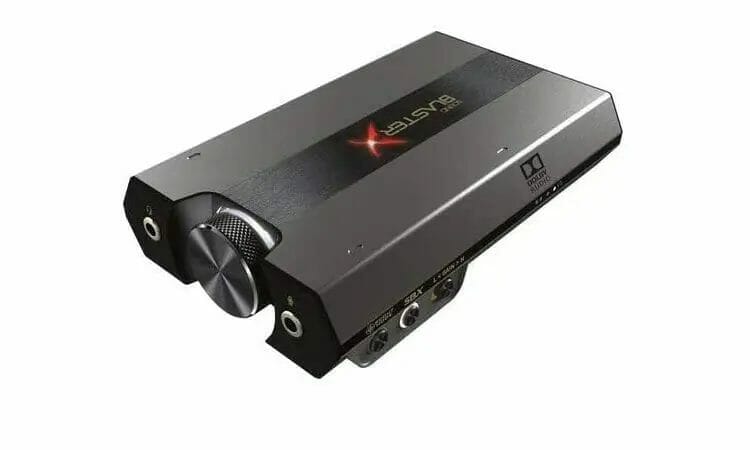 If you spend a lot of time playing games, you’ll love this external sound card. But, it also has some other valuable benefits. Let’s check it out and see why it makes the number-one spot on our list of reviews.

If you’re looking for better audio quality, such as when playing games, this external sound card is definitely going to help you achieve that – and it also comes with some extra frills and features you’ll love. 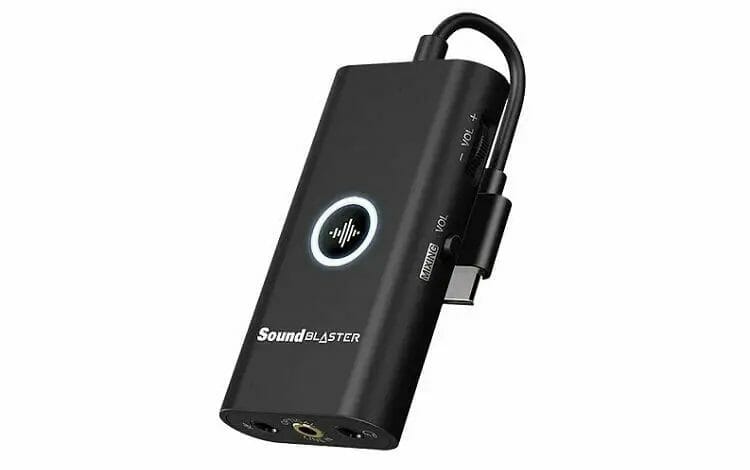 This is another external sound card from Creative Store, but how does it compare to the previous product? Let’s find out by taking a closer look at its features.

This external sound card has many excellent features in place to boost the quality of your audio, and it’s especially good to purchase if you already have your own mic and headset that you want to connect. 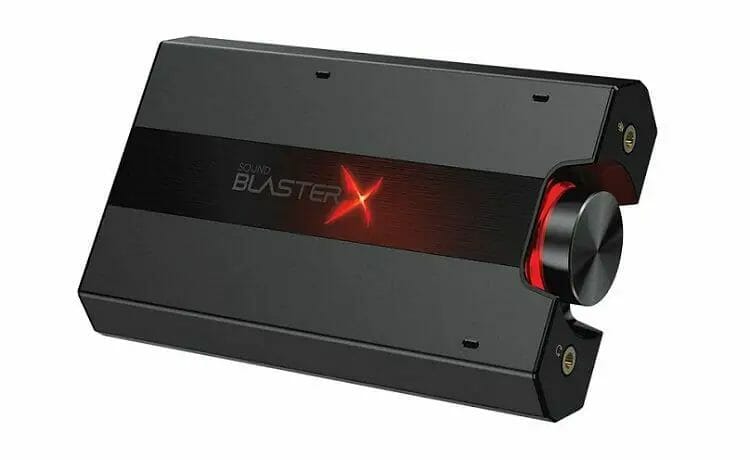 If you’re an avid gamer who wants to share your gameplay with viewers on platforms such as Twitch, this Creative Sound device will take your experience up a notch. Here’s why.

If you want to buy this Sound Blaster because of all its special features, make sure you keep an eye out for Amazon specials. Recently, this external sound card was selling for almost half of its original price. 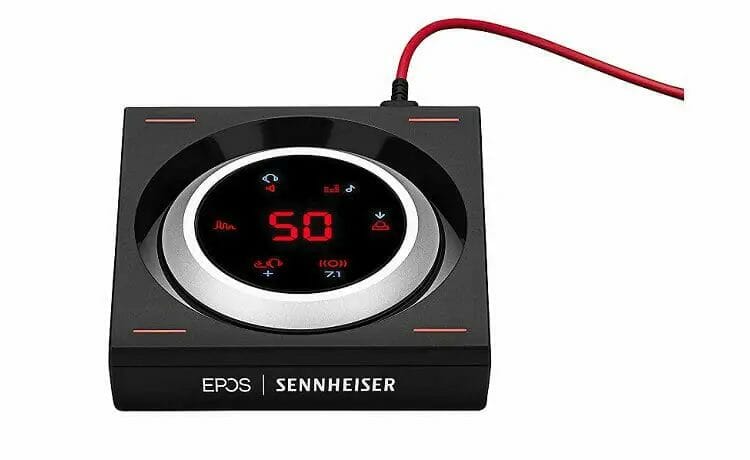 This audio amplifier offers 7.1 surround sound, but what else has it got to offer you? Here’s what you need to know about it.

While this sound card might be a bit expensive, it’s worth purchasing during sales. Keep an eye out for them on Amazon. 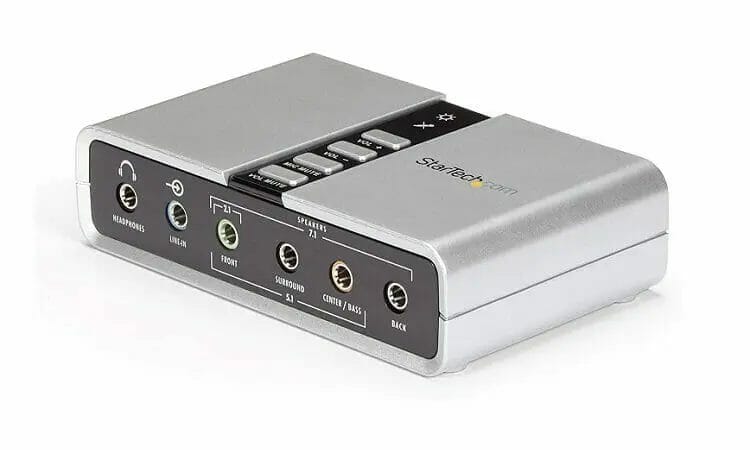 This StarTech sound card makes the list of the best sound cards on the market because it’s the ideal upgrade for your PC or laptop. Let’s see what it has to offer.

This is one of four StarTech sound cards you can purchase from Amazon, and it’s the best external USB sound card because of how it’s a multi output and dual mic. That said, it is a bit more expensive than others you can purchase, such as the 3.5mm audio adapter.

Now that we’ve looked at the best external sound cards on the market, you might have some questions about sound cards and how they work, and if they’re really worth purchasing.

Here’s what to know. 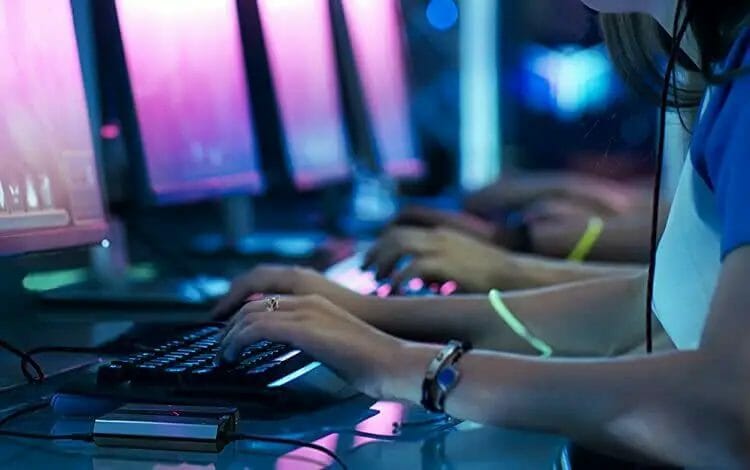 An external sound card is said to be really useful to improve audio quality, such as when gaming or recording your voice. But can you really tell the difference between using your device’s in-built audio and the external sound card?

Sound cards can definitely enhance the sound quality of your system. However, they need to be combined with a good headset and quality speakers otherwise you won’t be able to tell if they’re working well!

Let’s take a look at what to know about external sound cards.

External sound cards get connected via Thunderbolt and USB to your devices. They are portable and convenient to use because they’re so small, while also being of the plug-and-play variety.

They’re focused on giving you improved audio quality in a more convenient way because they’re compatible with all operating systems. Since their connections are easier to reach as compared to those on other sound cards, this makes them valuable for recording studios.

They are better than internal sound cards because they are easier to access. You don’t have to open up your laptop or PC.

Another important feature of external sound cards is that they enable you to have better, more convenient control over the sound in your game, which is especially important when you’re chatting to friends or teammates during gameplay.

Is a DAC better than a sound card? 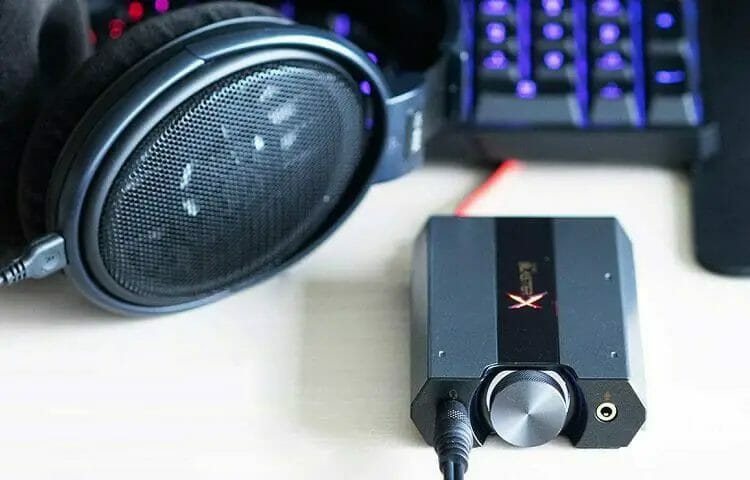 Before you purchase a sound card, you might wonder if you should just get a DAC. But, what is a DAC? A DAC (otherwise known as a Digital-to-Analog Converter) basically converts digital audio into an analog signal so that you’re able to play the audio over speakers or headphones.

This is actually the same thing as a sound card, but there is an important difference between the two that you need to know about. A sound card is usually installed inside the computer and connected to the motherboard. Of course, an external sound card is not – this makes it easier to use and more portable.

Now, you might wonder if you even need a DAC if you have a sound card. Well, to further complicate the issue, you should know that DACs are so essential in PC audio systems that motherboard audios and sound cards usually already have them installed. This is because they’re essential to draw sound out of digital devices.

Does a sound card act as an amp?

An amp, or amplifier, amplifies audio so that it can be used with headphones or speakers. It basically works to increase the analog signal that is sent by the DAC.

You can find DAC/amp combos that work well to provide you with greater versatility. For example, you can connect them to your computer via USB or your mobile device via Bluetooth.

By comparison, a sound card is a digital device that converts digital signals for sound, so that they can be used by speakers and headphones.

While it can be confusing to know how these devices differ, here’s an easy thing to remember. Most DACs will contain amps in their construction, but you won’t find this with all sound cards. These devices are built to drive other audio devices or gear like headphones.

That said, there are some sound cards on the market that contain amps. An example is the EVGA Nu Audio Pro 7.1, which is a sound card with a built-in amplifier to enhance bass and treble sounds.

When used for gaming, it provides better sound, such as during shooting or explosion scenes. This is especially useful if you’re using headphones because you don’t have to make use of a separate amp.

Does my PC need a sound card? 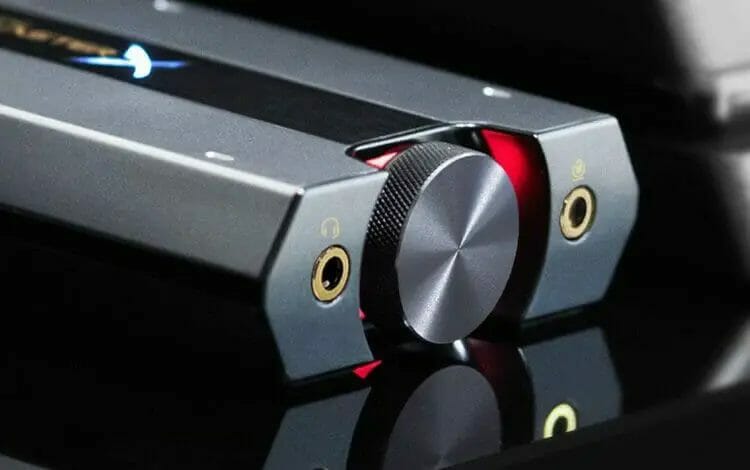 Right off the bat it’s worth noting that dedicated sound cards used to be essential but modern PCs already have audio hardware built into their construction that’s of a good quality.

External sound cards still exist, though, but why would you need them?

There are actually many good reasons why you should invest in a sound card for your PC instead of relying on your computer’s hardware. These include the following:

A PC’s audio hardware is susceptible to interference. This is because its motherboard has a lot of electrical impulses in it. There are also many other things happening in the device, such as USB connections and RAM. All of these contribute to sound interference. While some PC motherboards will have shielding for the computer’s audio parts, this doesn’t completely improve the situation.

Sound cards are useful for gaming. They can help to reduce your CPU usage and by offloading work from the CPU or GPU, this will give you better frame rates during gameplay. A frame rate basically refers to how smoothly a game can run on your machine.

External sound cards improve the basic sound that’s produced by your PC or laptop. They also give you a chance to control it separately from your machine.

External sound cards are small and portable, which is great for ensuring that you always have audio quality on the go.

Since external sound cards don’t have to be installed inside your computer, they will have greater protection against dust and other problems.

You can use an external sound card for a variety of tasks, such as connecting it to your microphone so that you can turn your device into a recorder. You’ll also be able to connect up to 7.1 surround sound system as well as your home theater sound system.

If you need to boost the audio quality of your PC or laptop, such as for gaming purposes, you’ll need to purchase an external sound card.

In this article, we’ve looked at five of the best sound cards to purchase. We’ve also provided you with information about sound cards in general, such as if you really need to buy one and what benefits they provide.